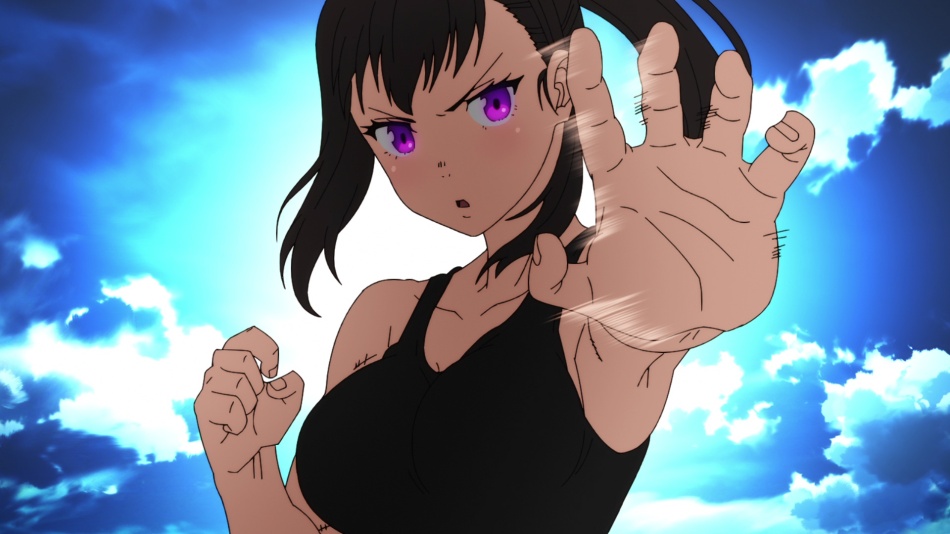 Thoughts on the episode? Eh. Not what I wanted out of the second episode. The first half felt so boring and cliche, exactly what I’ve been worried the entire show might end up being. I mean, I know I’ll enjoy a couple of the later episodes since I’ve already seen them, but I’m so worried about forcing myself through the episodes until I get there. At least I really started enjoying the episode once they got called out to deal with an infernal. It was great after that.

Favorite Moment? So, at first, I thought my favorite moment would be when Hinawa rained on their parade on the roof. I was laughing so hard at how intimidating everyone finds him. Him extinguishing all of Maki’s little adorable creations was also great because he has no empathy or remorse for anything he does and I love it.

Well… scratch all of that because the last few minutes of the episode threw that out of the window. My favorite scene was with Captain Obi. It’s toward the end after the house starts collapsing and part of the roof falls on him and Kusakabe yells out “Captain!” And Obi, looking like a complete badass, is holding the collapsed roof up with one arm while grasping a portrait of the family for the girl in his other hand. As they zoom in he says, “I don’t know who’s doing this, but I train every day. This is taking things too far!” and throws the remnants of the roof off of himself. That look of absolute and unforgivable anger on his face pumped me the hell up. That single moment did more for me than two entire episodes have. He then went on to say a quote that showed me exactly what type of character he is, “There’s no way I’ll ever permit anyone to disturb a fire scene that is still full of memories for the survivors.” Obi is starting to prove to be one hell of a character if he continues down this route.

Anything you didn‘t like? Pretty much what I mentioned at the top: the first half was boring and cliche. The only funny parts were the ones where Hinawa was involved and the other ‘comedy’ skits/portions felt so utterly forced that I wanted to cringe rather than laugh.

Any additional thoughts? I don’t know if any of you remember, but I had mentioned in the previous episode that I was very intrigued by Hinawa’s eyes. Well, that apparently still holds true. I don’t know what it is. I think it’s the fact that he has them open so wide and doesn’t seem to ever blink, like he’s afraid of missing anything or something? It’s very interesting.

Also, is that a new contender for a villain/antagonist that I saw? He’s very Soul-Eaterish in terms of design from the little I’ve seen so far, so color me intrigued! Although from the whole two to three sentences he spoke, it seems like he’s more of a nuisance rather than an actual villain, kind of like he’ll just be there to annoy the main characters for his own entertainment, you know? And my, oh my, is that Tsuda Kenjirou’s voice I heard? *shriek* I’m a little obsessed with voice actors for those who don’t know. Voices are one of my favorite things in life. I know it’s weird, but I don’t care. Fight me.

Anyway, onwards to the next! Látom.

0 comments on “Fire Force – Episode 2: The Heart of a Fire Soldier”