So, because I figured that there are more people out there that are like me and enjoy watching horror/gory stories throughout the month of October, I thought I would compile a list of shows that I believe would be perfect for the job. I’ll only be including shows I’ve seen since I can’t really tell you how perfect a show will be for something in particular if I haven’t actually watched it, you know? I’m hoping the below shows will be able to appease your urge for something intense for the month of Halloween. I will also be posting a separate one for manga, so please keep your eye out for that one.

So, without further ado:

Saya lives a split life: normal high school girl during the day, and a monster killer by night. She vows to protect her perfect little town with every ounce of her being. Little by little, though, she begins to realize that nothing, or no one, seems to be the way they should be, as secrets about the town begin to unfold one by one.

Kouichi transfers into class 3-3, where everyone is extremely friendly and personal with one another, yet he instantly notices that those very classmates seem to be ignoring a particular student. Even after countless warnings to pretend that she doesn’t exist, Kouichi still befriends the ignored classmate. Thanks to that, a serious of unfortunate circumstances begin to plague their everyday lives as they learn more about the horrible truth of class 3-3.

8.) Highschool of the Dead

An undead apocalypse suddenly takes over Japan. After these undead infiltrate their school grounds, a group of unlikely friends and students team up in order to escape the now-prison and strive to survive and search out their family in this horror-stricken situation.

A series of short, horror stories told by a mysterious storyteller who appears at dusk in front of children, using a kamishibai (a traditional paper-scrolling device) to add visuals to his eerie, and quite disturbing, narration. 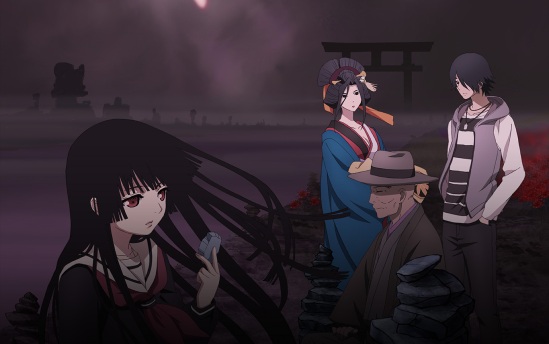 A website by the name of ‘Hell Correspondence’ exists for those longing to get revenge on someone, but the website only appears to those people at midnight. It lets them enter anyone’s name and that very person will be immediately taken to Hell, no questions asked. The catch? The person who entered the name into the website must make a vow to be condemned to Hell, as well, but only after they die. 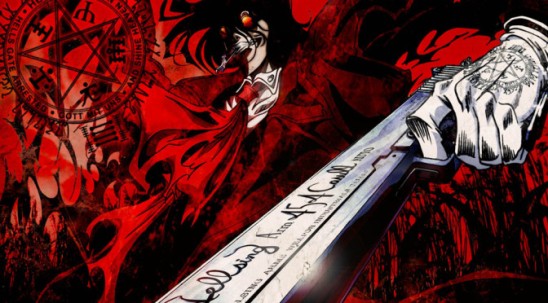 The battle between humans and vampires is one that stretches back to ancient times. A group that goes by the name of ‘Hellsing’ vows to protect humans from these creatures. Integra, the leader of this group, uses her army to take down anyone who opposes her and to stop any plans that she is against. At her disposal is her strongest and most absolute weapon, the king of all vampires, Alucard, who willingly fights against his own kind in order to carry out Integra’s orders.

The successful remake of the original Hellsing.

Keiichi moves into a small village called Hinamizawa. He quickly becomes friends with some of his classmates and they enjoy their time together. But, things begin to change for the worse when the town’s festival begins to approach. A series of disappearances and murders begin to occur, and the more Keiichi learns about the town’s legends, the more he begins to realize everything seems to be connected to that very festival.

A group of students from Death Weapon Meister Academy join hands in trying to take on numerous missions to collect souls and protect Death City from the threats that are constantly lingering around them. These students are able to use one another as literal weapons in these missions. The student weapons must also collect 99 souls in order to transform into Death Scythes and, therefore, become the strongest weapons in the world. 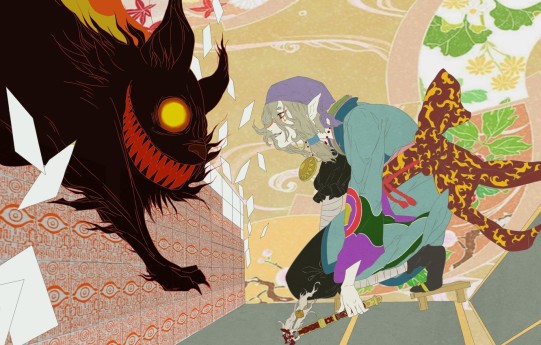 The medicine seller, who goes by the name of “Kusuriuri” (which pretty much translates to ‘apothecary’) wanders around feudal Japan in search of monsters/spirits called “mononoke”.  However, he can’t just slay them and be done with them. He has to go through an intense process of learning the mononoke’s Form, Truth, and Reason before being able to officially exorcise them and finally put them to rest.

Shiki tells the story of a small village that’s inhabited by creatures called, well, Shiki. They’re the village’s version of a vampire. These Shiki, who border between what’s good and what’s evil, must deal with clashing with the villagers, who are always anxious and paranoid from the unnerving feeling that something is suddenly very wrong in their once-peaceful village.

*note: I placed this in the anime list and not the manga list because the soundtrack is beyond words and adds so much to the atmosphere of the story.

I’ll eventually get around to legitimately reviewing a majority of the above, but for now, enjoy any you decide to watch throughout the month of October. Let me know what shows you end up picking to watch, or just which ones you usually like to binge during the month of Halloween; maybe I’ll find some others to look into that way as well!

0 comments on “Top 10 Anime to Watch in October”