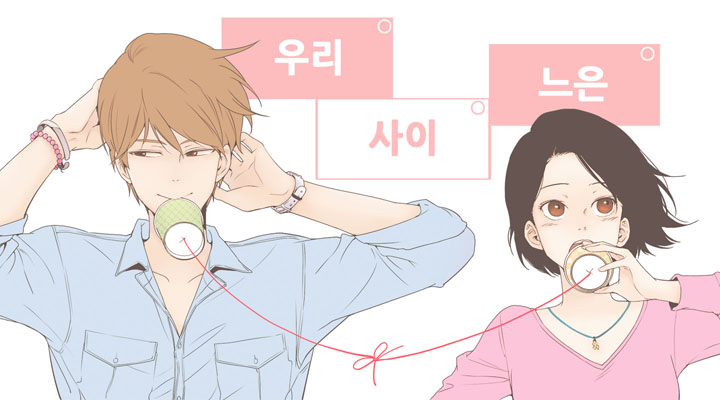 *Warning: This may contain minor spoilers*

Synopsis: Doh Gayong and Han Woojin have been the best of friends since high school, to the point where even their mothers are good friends, as well. Everyone around them blindly believes that they’re dating. They’re the only ones who have never thought that “love” was part of their relationship; not until they enter college and each tries to start dating other people while also trying to remain friends with one another like before.

Story/Plot: This is pretty much your typical ‘childhood friends fall in love’ story, which is admittedly the only reason why I decided to pick this manhwa up. It’s one of my guilty pleasures. This one attempts to stay away from the more cliché type and manages to give us something more. This story doesn’t just end where one person confesses to the other and boom, that’s that. This one dives into what exactly it takes to successfully maintain that relationship. The story takes place while they’re in college, as well as, at work, so we get a look at their more ‘adult’ lives. With that, you get to see and experience the realistic struggles of what it takes to be in a relationship when you have so much going on in your life (school, work, friendships, family issues, etc.) and how difficult it is to keep your head above water during those times. It shows how much trust, dedication, and care it takes to make that relationship succeed. It also shows us how strange and sometimes awkward it can be when you initially make the transition from close friends to lovers. It just all felt so realistic and beautifully done in that aspect.

The ending, on the other hand, was regrettably very anti-climactic. It wasn’t a horrendous ending, but it didn’t do anything at all to satisfy all of the buildup that I had to go through in order to get to that point. It was very unsatisfactory and, truthfully, very rushed. The fact that it took so long to see any type of romantic development between the two main characters (it doesn’t happen until well past the halfway mark of this 101 chapter manhwa) made everything afterward feel like it lacked a lot of the meat.

To be honest, the side stories after the conclusion were probably the best part of the entire manhwa. Because we receive zero closure for nearly all of the side characters that we spent so much time getting to know, these extra stories were a blessing in disguise. They served to attempt to give some type of closure to their own stories, which, they sort of do, but are still not what I was hoping for. You get insight into what these characters are thinking (since we only ever get the point of view of our two main protagonists) and what they go through on a daily basis. It’s very refreshing. It almost felt like that first sip of water you have after waking up: extremely needed and revitalizing.

Characters: I think this was probably one of the strongest points about this manhwa. It does a good job of showcasing the extremely entertaining friendship of the main leads. It’s a friendship that you don’t see in a lot of romance stories because it involves a female that is not exactly girly, but she’s not a legitimate tomboy either. It’s a healthy mix of the two, so she really knows how to have fun with our male lead, which, in turn, entertained me greatly. They were both pretty witty and funny with one another and I sometimes found myself giggling at their antics.

The one issue I had with the characters was that they would have such pointless arguments/fights with one another. They served no purpose except to add to the drama column. Granted some of them actually helped progress the plot, but others were just kind of there and would sometimes put me off from continuing to read since those portions tended to terribly drag for no reason. Instead of getting romantic development and additional bonding between the characters, we get petty and rather childish squabbles between them. Luckily, it doesn’t happen all the time, but enough for me to feel the need to point it out.

The love triangles that are shown were kind of back and forth with me. When it was Woojin, Gayoung, and another female (for sake of spoiling too much I’ve redacted the name), it was great. It showed exactly what people go through when in those types of situations and the difficulties of trying to maintain both a romantic relationship and friendship with the opposite gender. When it was Woojin, Gayoung, and another male, it was a bit… choppy? Everything that led up to that particular love triangle was great, but the way it played out and eventually ended was so underdeveloped in comparison. There was room for much more to be explored and used.

Also, before I forget, I must add that the art style is absolutely gorgeous and probably one of the best I’ve seen in manhwa. All of the characters look so nice, well-drawn, and unique. It’s easy to tell just by the clothes alone how much time and dedication the author took to draw each and every character, whether it was a main character or just a background one. The colors used were also so easy on the eyes. I can’t properly express how beautiful the art style is. The author did an incredible job in that department.

Favorite Character: It honestly took a while for me to find a character that I could consider to be my “favorite,” but when I did, I found two candidates at around the same time, which was not my intention. It isn’t until now that I’m writing this review that I finalized my answer. It’s not difficult because I’m super attached to them, but because I didn’t particularly cling myself to any of them. Most of the characters are super great and realistic, but I saw them more like ‘friends’ as opposed to ‘favorites,’ if that makes any sense at all. Anyway, my favorite character was Mun O-Hyung, who was pretty much friends with everyone. He listened to everyone’s problems, gave them advice, encouraged them, and even looked after his best friend like he was his mother. Woojin was often hanging out with him in his room, as well, toward the first half of the manhwa. Although Mun O-Hyung definitely preferred to side with his best friend and sometimes involved himself in situations, he more often than not stayed neutral and remained a bystander. I truly didn’t think he would end up being my favorite, but he turned out to be pretty entertaining overall.

Overall Score: Taking everything I’ve said about this manhwa, both good and bad, into consideration, I’ve realized I thoroughly enjoyed the story and characters despite its several mishaps and horribly rushed ending. I think I’ll give this one an 8/10.

Do I Recommend This?: I genuinely and wholeheartedly recommend anything I score an 8 or higher to anyone. However, this one, in particular, I would only recommend to those who enjoy slice of life stories with a side helping of romance in it. It’s a bit of a slow burner in the romance department, so don’t dive into this one head-first if that’s specifically what you’re looking for. Nonetheless, I got what I wanted out of this one (childhood friends falling in love), so I’m pleased.